Brooks Brothers Black Velvet Slippers, as comfortable as they sound. Manufactured in England by Peal & Co.

Shown are two of my favorite shoe styles. The first is a gentleman’s leather- soled velvet slipper or loafer depending on how regal you are feeling. I particularly like the quilted silk lining on the inside of these. From Brooks Brothers and in an elegantly simple plain black. Check Stubbs and Wooton for something with a little more flair. 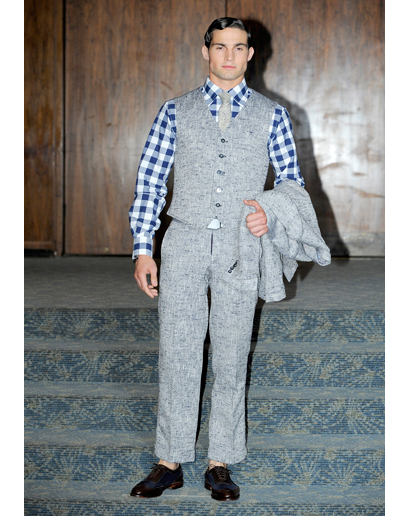 Also at the moment I am really liking the look of a flannel or light grey wool suit. This guy, taken from gq.com, has the right idea. What is especially appealing here to me is that the cut of the suit is not razor sharp like most that I have seen recently. The gentleman has more of a 1920’s-30’s appeal to him that I am sure will grow in popularity with the success of HBO’s “Boardwalk Empire”. Similar to Mad Men’s early 1960’s style influence.

Billy Reid Spectators – Not called wing-tips, but spectators for their two-tone color. These not only mix colors but also materials with a leather shell and what looks to be canvas in tan. England’s Peal & Co for Brooks Brothers also makes a nice pair of Spectators during the warmer months. This pic was also taken from gq.com